Last week I attended Hamilton’s first Newcomer Day at City Hall. During the event, I had the chance to help out at McMaster’s booth, which had a prominent spot in front of the Council Chambers where a Citizenship Ceremony was held, welcoming 35 new Canadian citizens from 15 different countries.

At the Mac booth, I had the privilege of meeting fellow Hamiltonians, some of whom had arrived in Canada a few months ago, others who were excited to become Canadian citizens. There was even one person who became a Canadian citizen at City Hall in the 1970s. Personally, it was a nostalgic moment, bearing more significance now compared to the distant memory of when I took the Oath of Canadian Citizenship on May 24, 2011.

Growing up, the word “home” elicited not one, but multiple images in my mind. I was born in India, lived in the U.A.E until I was seven, and then moved back to India. By the time I was 10, I had changed schools three times and called five different houses my home. So when my parents told my brother and I that we would be moving to Canada, I didn’t register what a big and permanent change it would be. To me, this meant that there would be another school and house to add to the list.

To be honest, I wasn’t even sure where Canada was until I looked it up on a map and later asked my parents: “Why aren’t we moving to America?” Although I was excited, I grew up watching Hollywood movies and American TV shows, like Tobey Maguire’s Spiderman and The Fresh Prince of Bel Air; I just wasn’t aware what Canada had to offer. Little did I know just how much the country would offer me 11 years down the line!

So on June 5, 2007, my family and I said our final goodbyes to the life we had in India and after a long 28-hour journey, I learned that the new place I would be calling home was the city of Brampton. It didn’t fully sink in that we were in Canada until I stepped out of the airport and realized how quiet the drive to our apartment was compared to loud, bustling streets of India.

My excitement of being in Canada was only fueled by all the experiences I had in the first few months of living here, during which I visited Niagara Falls, saw the CN tower, tried Timbits, and saw the beautiful colours of the trees in the Fall. Once October hit, I distinctly remember watching The Weather Network every night waiting for the first snowfall of the year. When it finally snowed, it exceeded all expectations that I had from watching Bollywood movies!

Looking back, these fun memories seem to cloud the hardships my family and I experienced. Like with many other immigrant families, my parents’ degrees weren’t useful in Canada. So, while my dad worked abroad, my mom had to improve her English, get a job that she was overqualified for, learn how to drive a car, and do more schooling to become a lab technician in order to raise my brother and me. They had to work hard for us to enjoy the luxury of getting an education at a world-renowned University.

As for my brother and I, we had to adjust to a completely new culture and education system, make new friends, and juggle our identities of being Indian with the pressures of “fitting into” Canadian society. But, this adjustment came with its own consequences. Less than two years after immigrating, on my walk to school one day, I realized that my thoughts were somehow no longer in my mother tongue Telugu but in English. Soon after I found myself not being able to speak the language that connected me to my Indian culture fluently anymore.

A few years later, all the hard work paid off as my mother, brother, and I finally became Canadian citizens. Although I didn’t realize the significance of the ceremony at that age, it has contributed to one of the most important aspects of my identity today. Thinking back to that day, I remember how happy my mom was that her children wouldn’t have to endure the same struggles she had. For her, we would get to grow up in a country where they would have better opportunities to achieve their dreams. At that moment, the sacrifices my parents made to leave their families and way of life behind to start a new chapter in a country far away were all worth it.

Fast forward a couple of years to 2014. That was when I graduated high school and made the decision to attend Mac for my undergrad. Since my brother was also doing his undergrad at Mac, my parents thought it was a good decision to move to Hamilton. At the time, Brampton was the only place that I had called home for seven years, the longest amount of time out of all the cities I lived in. This sentiment combined with the uncertainty that came with starting University and moving to a new city made me hesitant about calling Hamilton my new home. To me, Hamilton was the address on my official documents, but when the question “Where are you from?” came up in conversations, my answer was always “Brampton.” Soon, I associated the stress of being in University to Hamilton and felt stuck when I couldn’t leave the city to go home on weekends and during the holidays like many of my friends did.

However, after becoming involved on-campus in my second, third, and fourth year, I realized that the mindset and misconceptions I had about the city were due to my lack of engagement with the community that I was surrounded by. After participating in events and volunteering on- and off-campus, I’ve slowly stepped out of my own comfort zone and am finally starting to feel at home in Hamilton. Attending Hamilton’s Newcomer Day, not only solidified the importance of getting involved in my community, it also reminded me that as an immigrant and citizen of Canada the importance of remembering and acknowledging the indigenous communities whose land we are on when appreciating the beauty of this country we call home. 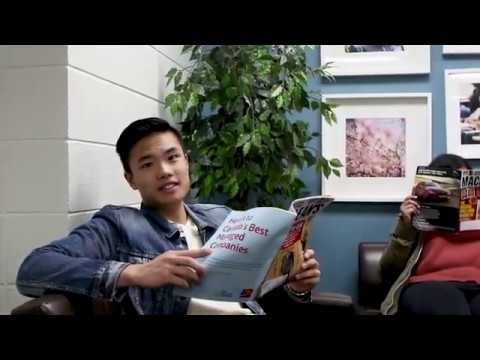