What does resilience mean to you?

To me, resilience means never giving up. Not giving up when things get hard, when other people say you can’t do it or when you begin to doubt yourself. It’s about repeatedly getting up after falling and trying again and again until you succeed.

Describe a time when you had to demonstrate resilience to deal with a difficult situation or overcome a challenge. What did you learn from that experience?

Toward the end of the first semester of my first year, when most students begin to think about what they want to specialize in for second year, I realized that none of the pathways I previously imagined for myself seemed to fit with where I was at the time. Despite being in the Life Sciences program, I absolutely hated chemistry, couldn’t seem to figure out physics, didn’t feel any passion for biology and didn’t really like studying parts of the brain in psychology. This pretty much ruled out all the science programs that I could think of, and I was in a pickle.

So, I decided to take a leap of faith, enrolling myself in two first-year anthropology courses as electives. I ended up falling in love with the subject, so I transferred into the program.

This change also led to a new dilemma. What does one do with an anthropology degree? So, I visited the Student Success Centre and chatted with one of the career counsellors, who told me a story about how one of their previous students studied philosophy but ended up working in a bank and now has a successful career. This inspired me and gave me the idea that my degree would not limit my options and that I shouldn’t give up searching for a career path that suits me.

I took the SOCSCI 2EL0 course, started applying for internships in anything that remotely interested me, had a few interviews and ended up with a 12-month internship in financial services. Despite knowing absolutely nothing about the financial services, I had supervisors and colleagues there to teach and help me along the way.

If I had given up in my first year or when I was confused about future careers, then I would not be where I am today.

What would you tell other students experiencing similar situations?

Sometimes, the program or career path you initially imagined for yourself just isn’t meant to be, but that doesn’t mean you should give up. It’s the same with clubs or extracurriculars you may want to get involved in. Even if you don’t get accepted the first time, if you really want to be involved, keep trying! But also keep your mind open for other opportunities. There is definitely something out there for you — you just haven’t found it yet!

It’s also perfectly okay to change your mind, have no clue what you are doing or stray from your initial plans. Despite being in my fourth and last year of university, I am still not 100% sure what the future has in store for me. But I’m excited to find out.

There have been many changes during the pandemic. The return to campus will be another one. What’s one way that you’ve managed change that you’ll use next term?

I manage change by being positive and thinking about the good instead of the bad. For instance, due to the pandemic, my entire internship was remote, and I wasn’t able to really get to know many of my coworkers. But it did save me a lot of commuting time and gas money, and it allowed me to continue taking courses on a part-time basis online. Without this situation, I wouldn’t be graduating in the upcoming spring and would likely have another year of school.

So, even though returning to campus will be another change, focus on connecting again with friends and meeting new people. Get excited about livelier lecture and tutorial discussions, in-person clubs, events and formals, and many other benefits!

I also got a kitten during the pandemic, so I guess I managed change by adding more changes. But I have to say it has been extremely nice to have a cuddle buddy to de-stress with.

Ashley is a fourth-year Anthropology student who volunteers with the Student Success Centre as a peer leader. Some of her likes include reading, travelling and food. 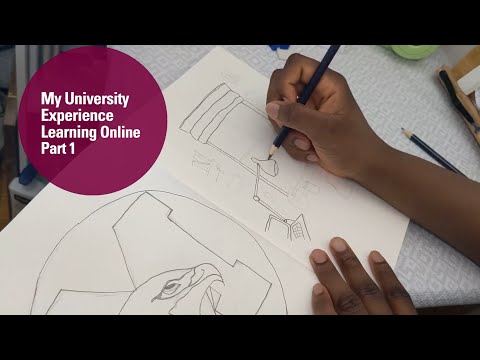