When I was considering schools for exchange, one major criteria on my checklist was whether they had a cross-country team. As a varsity athlete here at McMaster, I thought it would be really cool to compete overseas for my exchange university. The University of Limerick checked off this box and many more. I was ecstatic to find out that I would be studying there for a semester! I contacted the team with my personal bests and secured a spot on the team. I was in for a great season! Or so I thought…

At my first trial practice with the team, something didn’t sit right. We were practicing at 7 p.m. around a poorly lit and crowded track. I was one of the few girls at practice, and the only one that ran long distance. In addition, the coach had a more sprint-centric focus on his workouts, which is not what I am used to. Long story short, I unfortunately decided it was not in my best interest to join the team. I was so disappointed. I was really excited to train for something big.

After this initial setback, I got to thinking. It has always been a dream of mine to run my first half-marathon (21 km) on my 21st birthday, which so happened to be on Saturday, April 7 of my semester abroad. I looked into half-marathons across Europe on that exact date and came across the Payerbacher Frülingslauf in Austria. With the help of a good friend that I met at UL, I was able to register for the race. All I needed to do was get out the door and start running.

Travelling solo to Austria was daunting. I was nervous and excited, but it was a great learning experience! In the small town of Payerbach, where the race was held, I immediately felt welcomed. Everyone was so excited that a Canadian was competing, as it is usually only their local community members who participate. The event had a great atmosphere. There was a live band and families with young children running around. The scenery was beautiful too, which in addition to all of the encouragement from spectators, helped distract me from the discomfort of running for 21 km! Upon finishing the race I received a finisher’s medal, handed to me by a youth in the community. I ended up being the first female to finish and 10th over-all, which is something I was very proud of accomplishing. At the community pasta party and awards ceremony, I was handed the largest trophy I have ever received and tried to figure out how I would fit it in my carry-on. Both the medal and the trophy are things that I will treasure, as they are a reminder of the great adventure I experienced.

My weekend in Austria was an amazing experience that I will never forget. Even though my plan did not work out, I was able check the box on one of my lifetime goals in the coolest way possible. I would not have been able to embark on this adventure had I not gone on an exchange and I am so grateful for the opportunity to do so. With that being said, if you find that your plans change while abroad, get creative! Think of something that excites you and that is different than what you are used to. Jump out of your comfort zone. It is amazing what you will accomplish!

Alison Head is a fourth year student in the Biology Physiology program within the Faculty of Science at McMaster University. She studied for a single term at the University of Limerick, Ireland. 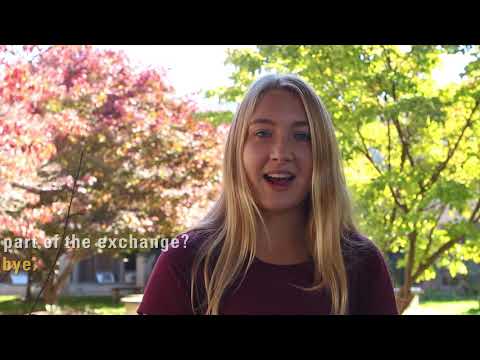